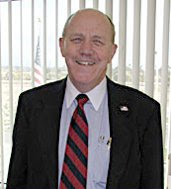 Was sad to hear that Larry Reider, longtime Kern County Superintendent of Schools, has finally decided to call it quits and head into retirement. I say sad because Larry is one of the "good guys," a public official who threw his heart and soul into his work and showed up at his office every day determined to make this a better place to live. I don't think it's an exaggeration to say Larry is one of the most popular public officials in town. He has been involved and served on the boards of about every non-profit and he has always provided the resources of his offices to those in need. And, of course, it never hurts that Larry has a dynamic personality, a rapier like wit and a genuinely upbeat personality. Seeing Larry and wife Sandra at fund raisers across town has always been a highlight, and he promises to stick around and not be a stranger. Here are a few of Larry's accomplishments over the years (Larry is pictured below with museum director Bernie Herman at a recent museum opening): 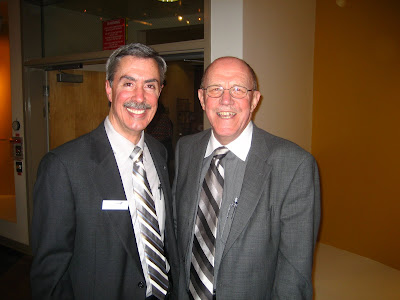 * He had a 44-year career in education, the last 10 as county superintendent.
* He was one of the founders of the Community Reading Project along with The Californian and our publisher Ginger Moorhouse. That program sees hundreds of volunteers go into 30 schools to personally tutor second graders.
* He was a key player in the Ready to Start program that targets kids heading into kindergarten.
* He co-chaired a teacher retention and recruitment task force that developed approaches to recruit and retain more Kern County-based teachers.
* I could go on but you get the picture. And suffice it to say that Larry was involved in any number of local organizations, from downtown Rotary to Bakersfield Vision 2020 to the Chamber of Commerce to the Bakersfield Museum of Art. And that just scratches the surface.
Posted by Richard Beene at 7:43 AM