Ford: steady hand and good products give its dealerships something to crow about 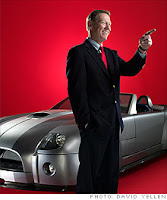 Nobody over at Jim Burke Ford is claiming the recession is about to end, but there is an undeniable sense of optimism about the direction Ford Motor Co. is heading under new CEO Alan Mulally. Ford is turning out some terrific cars (read my earlier post on the Fusion hybrid here) and its decision to reject federal bailout funds has turned into a huge public relations windfall. (Before I go on, an anonymous "commenter" on this blog earlier accused me of hyping the Fusion because I likely owned a Ford. For the record, I drive nothing but Toyota products and have for years, but I'm an unapologetic cheerleader for local companies like Jim Burke Ford and am thrilled that Ford Motor Co. is making a comeback.) 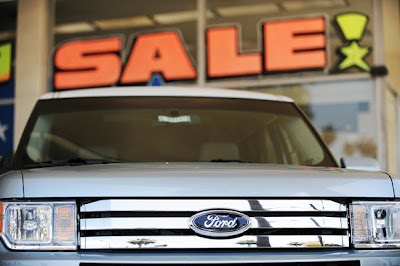 So when I got an email today from Burke marketing czar Kyle Northway about a story in Fortune magazine about Mulally and his efforts at Ford, I was eager to open the file. You just have to love the common sense that Mulally has brought to Ford, as seen in this excerpt from the story (full story available here):

"I arrive here, and the first day I say, 'Let's go look at the product lineup.' And they lay it out, and I said, 'Where's the Taurus?' They said, 'Well, we killed it.' I said, 'What do you mean, you killed it?' 'Well, we made a couple that looked like a football. They didn't sell very well, so we stopped it.' 'You stopped the Taurus?' I said. 'How many billions of dollars does it cost to build brand loyalty around a name?' 'Well, we thought it was so damaged that we named it the Five Hundred.' I said, 'Well, you've got until tomorrow to find a vehicle to put the Taurus name on because that's why I'm here. Then you have two years to make the coolest vehicle that you can possibly make.'?" The 2010 Taurus is arriving on the market this spring, and while it is not as startling as the original 1986 Taurus, it is still pretty cool."

While I am sure the Ford dealer in town appreciates your generous remarks, I think it is important to remember that there are car dearers in town other than Ford that contribute to the welfare of Kern County, not to mention support our local newspaper.

Agree. One of the things our local dealerships have in common is that they are all locally owned and all do their part to be involved in the community in a big way. Three-Way Chevrolet and Motor City are big time community sponsors as are the others. Our community needs these guys and I am unabashedly pulling for 'em all. I have focused on Ford because of its somewhat unique position of staying out of the fed bailout program and its new leadership.