Cops: Man who blinded son by biting out his eye once tried to hide dope in the boy's crib

Another day and yet another stunning development in the tragic story of the man who blinded his son by biting out his eye in an apparent drug crazed frenzy. The boy, little Angelo Mendoza, was left blind while the cops are trying to put together exactly what happened. One thing is clear: there are no good guys in this sordid story that involves drugs, possible gang involvement, a missing mother and possible malfeasance by Child Protective Services. The latest development comes from The Californian, which reports that three years ago - when the lad was just 1 year old - cops were at the boy's house when they found a container with traces of drugs hidden in his crib. His parents were taken into custody, CPS was called and the boy was taken into protective custody. 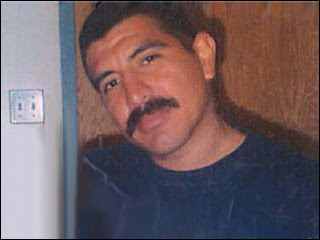 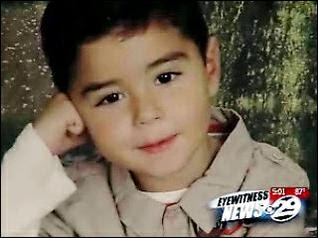 But somehow, the boy was returned home to live with his dad, who reportedly has a long criminal record and possible gang involvement. Then, a few days ago, he attacks his son and literally bites one eye out and damages the other. So many questions: where was the mother, Desirae Bermudez? A TV station says she didn't live with the boy. And where was CPS, particularly if they knew the father had tried to hide his drug stash in the boy's crib three years earlier! This is one of those stories that has made the rounds across the globe, and just this afternoon a family in New Zealand emailed me asking how they could help. Stay tuned. We'll look into establishing a trust fund for little Angelo, who is apparently now blind in both eyes. So much sadness for a boy who did nothing wrong.
Posted by Richard Beene at 6:38 PM

There is a website that you can go to for making donations for his new special needs. I got it from the Mercy Hospital where Angelo was taken after his attack. www.imforeverchanged.com