Came across a wonderful summary of the commencement speech that Google CEO Eric Schmidt gave at Carnegie Mellon University in Pittsburgh. It's a powerful speech that speaks to the power of the innovative mind and how quickly the world is changing. (see the entire post here) It struck me that it's not only graduating seniors who who need to hear this, but also everyone in any kind of business being challenged during these difficult times. And this includes folks who work at newspapers and other "mainstream media," many of whom are spending their energy trying to hang on to the past instead of embracing the future. The truth is the old models of so many businesses - including newspapers - have been rendered largely impotent by forces out of their control, and try as they might, the old comfortable way of doing business is gone forever. They can and will survive, but they will emerge totally different animals that embrace an "open source" idea of welcoming outside content and operating more efficiently with smaller staffs and new ways of presentation both in digital and print. Those who don't learn to take risks, and innovate, those who insist on clinging to yesterday's model, will most certainly perish by virtue of making themselves expendable. 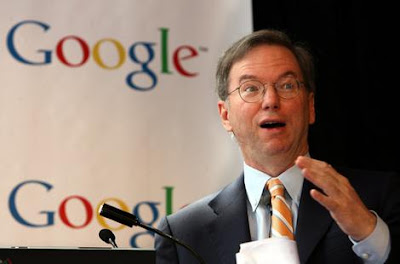 As Schmidt told the graduates:
“To some extent you were penalized for making mistakes historically. Now you have to make them because mistakes allow you to learn and to innovate and to try new things. And that’s a culture of innovation that is going to create the next great opportunities for all of you as you come to run and rule the world and the rest of us retire.
“Don’t bother to have a plan at all. All that stuff about having a plan, throw that out. It seems to be it’s all about opportunity and make your own luck…. You cannot plan innovation. You cannot plan invention. All you can do is try very hard to be at the right place and be ready….
“How should you behave? Well, do things in a group. Don’t do things by yourself. Groups are stronger, groups are faster. None of us is as smart as all of us…..
Posted by Richard Beene at 9:31 AM