Weekend Bako Bits: A drowning at RiverWalk, DUI checkpoints and more on the monster Mendoza

In the middle of a long Memorial Day weekend and while it's hot, it's certainly bearable and there is much for which to be thankful. Plenty happening around town, so let's get to it:

* ... ANOTHER DROWNING: When it heats up, it's a given that the crowds will descend on the new RiverWalk park off Stockdale Highway and - you guessed it - completely disregard the no swimming signs posted around the lakes. So I suppose we shouldn't be surprised that we've had the first drowning of the year, a 16-year-old named Ricardo Lopez. He died today (Saturday) after being pulled from the water Friday. KGET reported the family waited 15 minutes before calling 911, but that won't stop our slip and fall lawyers from filing suit against the city. It's a terrible tragedy, but a little common sense could prevent these things. 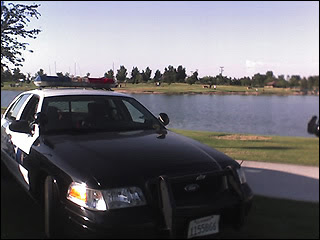 * ... COPS OUT IN FORCE: When the cops tell you they're going to be out in full force on a holiday weekend, believe them. I ran into my first DUI checkpoint Friday afternoon (on Ming Avenue near The Marketplace) where KGET reports they nabbed four drunks. Then this morning, I saw a Highway Patrolman posted by the side of Granite Road headed to Woody clocking speeders. And I saw another Bakersfield police officer pull over a green SUV full of teenagers and ticketing them near Cal State Bakersfield. Be safe out there.
* ... MORE ON MENDOZA: If you haven't read today's report in The Californian about Angelo Mendoza, the 4-year-old who was left blind when his drug crazed father literally ate his eye, pick it up. (or go to bakersfield.com to check it out) Reporter Steve Swenson is all over this story and reports exclusively today that the cops were called to the suspect's home about an hour before the actual incident, left and then were called back. I am not implying that BPD did anything wrong, just another tragic chapter in this sad story.
* ... PEOPLE ON THE MOVE: Heard yesterday that Cindy Pollard, the longtime spokesman for PG&E, is moving to Sacramento for a higher job with the utility. Cindy is one of those community activists that made this a better place to live, and she will be missed. Meanwhile I had a nice chat with former CSUB development director Mike Chertok (he retired) who tells me he is now the volunteer development director for the Bakersfield Symphony.
Posted by Richard Beene at 5:04 PM

A friend and I are doing a project on Riverwalk and we think obviously people are mindless these days and dont take responsibility for there actions. Just DRAIN the LAKE ALREADY!!