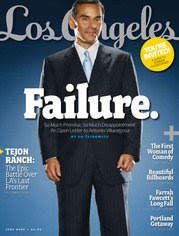 Read with interest a long piece in Los Angeles Magazine devoted to the proposed development of Tejon Ranch. Written by Pulitzer winner Ed Humes, the piece is a dagger at the heart of Tejon's plans to develop a small part of the ranch while setting aside 90 percent of it for conservation. Full disclosure: the CEO of Tejon is on my board, and I know Humes from my days in the Los Angeles media environment. Humes is a talented writer and journalist, having nabbed his Pulitzer for a series of stories for the Orange County Register on flawed night vision goggles used at the old El Toro Marine Corps (helicopter) Air Station. Humes also wrote the scathing book "Mean Justice" on the infamous child molestation cases in Kern County. But the LA Magazine piece is deliberately hostile to Tejon, which I found a tad surprising considering Tejon's agreement to set aside 90 percent of the ranch for conservation, a deal blessed by groups like the Sierra Club, Audubon California and the Natural Resources Defense Council. I suppose it's a wonderful idea to think folks who spent a cool billion or two to own the property would simply hand it over for posterity, but things don't work that way. To get an idea of Humes' bias, check out this excerpt from the LaObserved blog (read it here):

"To stand on a windswept hill at Tejon Ranch is to be at once humbled, enthralled and saddened by vistas that in years past defined California and the West by their plenty, rather than their dearth....

"Even though the owners are offering to conserve much of their surrounding land, this development remains exactly the sort of breathtaking sprawl, destruction of nature and epic commuting lifestyle that must stop if we intend to get serious about global warming. Tejon Ranch, then, is really a battle over whether America wants to begin acting like a climate hawk or continue to act the climate ostrich. It's the biggest project of its kind, so it's fair to say this is where our future lies � one way or another. 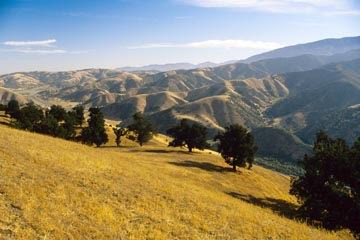 Wow. Is it really fair to put the onus of global warning on the backs of the directors and owners of Tejon Ranch? You be the judge, but seems to me Humes is playing lead tackle for the Center for Biological Diversity, which has been absolutely intransigent in its opposition to almost any development of the ranch. I felt Tejon's deal with the Sierra Club was sound: set aside a couple hundred thousand acres of Tejon for future generations, but allow the folks who put their own capital at risk to develop something. When I asked Bob Stine, CEO of Tejon, about the story he declined to elaborate, but he did tell me that Humes didn't even give him the courtesy of a call to respond. Hmmmm....
Posted by Richard Beene at 2:57 PM

I actually found the Los Angeles Magazine story to be incredibly balanced and truthful. To be honest, it's a story that should have been written in The Bakersfield Californian a long time ago. Oh, that's right, Tejon's CEO is on your board, so you can't write it and you have to attack an incredibly well-written story because of it. If you read the story, this development of 10 percent of Tejon Ranch is not so much supported by the conglomerate of environmental groups, but they are putting up with it in order to save the remaining 90 percent of the ranch and keep it from eventually becoming like the sad 10 percent that is going to be developed. The alternative would have been decades of legislation, as the story states very early on.

Let's be honest here. The development is ridiculous. In a time in which most of the world is looking to lessen their impact on the environment, these arrogant idiots are doing whatever they can to heighten their impact. Where are these people going to work? Either in Los Angeles of Bakersfield, each an hour away. That's a lot of vehicle emissions that are absolutely unnecessary. And that's just the beginning.

So settle down, sir. The world isn't out to attack your friends and buddies. But you would be a lot more credible (as would your newspaper), if you look at things with your eyes a bit more open. What you will find after opening your eyes is that there is a lot more to the world than this little hick town, and a lot of people are trying to clean up the environment, not ruin it like this smog infested, big truck driving city of Bakersfield.

Thanks for your comments but you are off base on alleging we have not covered the Tejon development or written about it. This blog represents my personal thoughts - not the paper's - and speaks for itself. And thanks for the advice to "settle down." I get that from my wife as well.

A link to the article can be found here:

I actually never said that the newspaper hadn't covered the story. I suggested that you should look at this "with your eyes a bit more open." That's all.