Inga takes on Roy: this could get ugly! 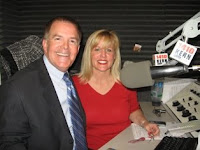 State Sen. Roy Ashburn, the Bakersfield Republican who has built a career around his "no more taxes" credentials, finds himself in the middle of the state budget mess as one of the few Republicans who may actually vote for the budget compromise. Lois Henry and The Californian had a good report on it today but she missed the sound and the fury coming from Roy's home town in the form of pitbull local talk show host Inga Barks, a woman not known for her intellectual curiosity or acumen. Via her soapbox on KERN (1180), Inga has spent the past few days lashing out at her buddy Roy for even considering the compromise. This is the same Inga who once said she would never vote for any bond issue (how then are we supposed to build schools?) under any circumstances, and she's clearly infuriated Roy has left the reservation. Make no mistake: Inga does have influence and a following, but it remains to be seen if she can move old Roy back onto the res. That's Inga and Roy in the photo in happier days.
Posted by Richard Beene at 10:03 AM