Why reporters can be their own worst enemy 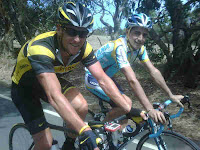 I am no huge fan of Lance Armstrong, the seven time Tour de France winner with the legendary ego, but he's one of the greatest athletes of all time and his work with the cancer fighting Livestrong Foundation is beyond reproach. Which is why I am posting a link to a video of an interview Lance did recently in which a reporter from a British paper posted a bone-headed question. Lance's measured but firm response is spot on, and the question and they way it was posed only serves to feed into a feeling by the public that the "mainstream media" is biased and cannot be trusted. That's Lance on the left of this photo, taken off Lance's Twitter site.
Posted by Richard Beene at 12:25 PM